Kashmir News LATEST Updates: The Centre has asked Twitter to block at least eight accounts on its website, for allegedly spreading rumours about prevailing situation in Kashmir. The accounts are: @kashmir787 (Voice of Kashmir), @Red4Kashmir (Madiha Shakil Khan), @arsched (Arshad Sharif), @mscully94 (Mary Scully), @sageelaniii (Syed Ali Geelani), @sadaf2k197, @RiazKha61370907, and @RiazKha723. The home secretary made the recommendation. Arshad Sharif is a journalist with ARY News, while Mary Scully is with Pakistan Today.

The Kashmir Police took has taken up a tweet, on the situation in Kashmir by Pakistani journalist Wajahat Saeed Khan, with the Twitter Support team. Khan’s tweet alleged that a Kashmiri policeman killed five CRPF personnel “after they refused to let a pregnant woman” travel “because she didn’t have a curfew pass”. The Kashmir Police called the tweet “malicious” and said that it “strongly rebutted” it.

The Supreme Court is scheduled to hear on Tuesday activist Tehseen Poonawalla’s plea challenging the Centre’s decision to impose restrictions and “other regressive measures” in Jammu and Kashmir following the revocation of the provisions of Article 370.

The Pakistan Electronic Media Regulatory Authority​ (PEMRA) “requested” media not to air special programmes on Eid, and on 15 August, to “project two nation theory, Indian atrocities against Muslims and minorities in India and Indian-occupied Jammu and Kashmir”.

Jammu and Kashmir People’s Movement president Shah Faesal drew flak on Twitter for saying that every Kashmiri was in mourning after the abrogation of Article 370. “There is no Eid. Kashmiris across the world are mourning the illegal annexation of their land. There shall be no Eid till everything that has been stolen and snatched since 1947 is returned back. No Eid till the last bit of insult is avenged and undone,” his tweet read.

People gathered in mosques across Pakistan on Monday to offer special prayers for Eid al-Adha, the second of Islam’s two major religious festivals. The government has called for the festival to be observed in a ‘simple manner’ this year, to express solidarity with Kashmiris.

After India’s decision to abrogate Articles 370 and 35A in Jammu and Kashmir and Ladakh, Pakistan expelled India’s ambassador and suspended trade in anger at New Delhi’s latest move. On Monday, Pakistan’s foreign minister Shah Mahmood Qureshi travelled to Muzaffarabad, capital of Pakistan-administered Kashmir, to offer Eid prayers at a mosque there.

India on Monday told China that it is important to ensure that any bilateral differences should not become disputes, as Beijing said it is “very closely” following the Indo-Pak tensions over Kashmir and its “ramifications” and asked New Delhi to play a “constructive role” for regional peace and stability. External Affairs Minister S Jaishankar, who is on a crucial three-day visit to China, called on Chinese Vice President Wang Qishan, considered a confidant of President Xi Jinping, and later had a restricted delegation-level talks with Foreign Minister Wang Yi.

Welcoming Jaishankar, foreign minister Wang referred to the Indo-Pak tensions without directly mentioning about India scrapping the Article 370 of the Constitution that gave special status to Jammu and Kashmir. “On the basis of the Five Principles of Peaceful Co-existence, we can have mutually beneficial cooperation. This is in the fundamental interest and long term interest of our two peoples and also contribute to world peace and human progress,” Wang said.

“At the same time, China and India as two big nations, also have important responsibilities for upholding the regional peace and stability,” he said. “When it comes to the recent tensions between India and Pakistan and the possible ramifications, we follow these developments very closely. We hope that India would also play a constructive role for the regional peace and stability,” Wang said.

There was no exchange of sweets between the Border Security Forces (BSF) and Pakistan Rangers along the International Border (IB) on the occasion of Eid this year, reports said. Addressing a press briefing on Monday, Jammu and Kashmir Principal Secretary (Planning Commission), Rohit Kansal said, “Over 5,000 devotees offered prayers at the Eidgah in Jammu. We’ve reports of the successful conclusion of Eid prayers from the Kashmir Valley in Baramulla, Ramban, Anantnag, Shopian, Awantipora, Srinagar and other places.”

Curfew was re-imposed in Srinagar on the eve of Eid-al-Adha, even as state police stressed the situation was peaceful in Jammu and Kashmir that has been in lockdown since the Narendra Modi government decided to repeal Article 370, which granted special status to the state. Eid, the biggest festival for the Valley, is a quiet affair this time, with markets in Srinagar and other parts of the Valley remaining shut, reports claimed.

Ahead of Eid-ul Azha, banks, ATMs and quite a few markets remained open on Sunday in Kashmir and restrictions were eased allowing people to come out to shop, while residents would be permitted to offer prayers in neighbourhoods mosques on the festival, officials said.

There has been no report of violence anywhere in Kashmir, they said.

While the administration said it was taking steps to facilitate availability of food and other items, the usual hustle and bustle of the Eid-ul-Azha festival was missing in the Valley where normal life has been paralysed following heavy security deployment, restrictions on movement and curtailing of communication links after the abrogation of special status to Jammu and Kashmir under Article 370 on August 5. 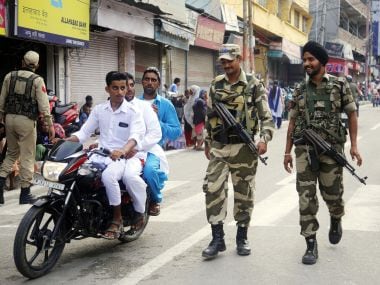 CRPF personnel patrol a street near a mosque before Eid-al-Adha prayers in Jammu on Monday. PTI

“Everything is peaceful. The restriction have eased and there has been lot of improvement in public and transport movement,” Deputy Commissioner, Srinagar, Shahid Iqbal Choudhary said.

Magistrates have been deployed at every critical place to act as facilitators for the convenience of the general public, an official spokesperson said.

A top government official said people will be allowed to visit neighbourhood mosques to offer prayers during the Eid-ul-Azha on Monday.

The administration has issued an advisory saying that 300 special telephone booths are being established to help people communicate with their kin. Telephone and internet links in the Valley have been snapped since 5 August. Meanwhile, National Conference leader and former minister Ali Mohammad Sagar, who was arrested a few days ago, was on Sunday shifted to a jail in Bareilly in Uttar Pradesh, the first mainstream political leader being sent out of Jammu and Kashmir, an official said.

So far 46 people have been shifted from J-K to jails in Uttar Pradesh in recent days.

District Magistrates have made elaborate arrangements for the Eid-ul-Azha, an official spokesman said, adding treasuries, banks and ATMs have been made functional even on holiday in the run-up to the festival

Six ‘mandies’ and markets have been established in Srinagar city while 2.5 lakh sheep have been made available for public for sacrifice on Eid-ul-Azha on Monday. The authorities have also deployed mobile vans for door to door delivery of vegetables, LPG cylinders, poultry and eggs, officials said.

The district administrations are constantly reviewing the situation in Jammu and Kashmir, and they will facilitate people to offer prayers in mosques during Eid, a top official told PTI, requesting anonymity.

Last Friday, people were allowed to visit neighbourhood mosques and offer prayers there. However, large gatherings were not allowed in any part of the Valley.

Asked about the restrictions imposed on communication links, the official said these were “temporary” measures taken to maintain peace and prevent circulation of misinformation and rumours.

“The government is conscious of the ground situation and doing utmost so that there is minimum inconvenience to the people. Everyday something or the other restrictions are relaxed. We will take decisions on lifting restrictions on phones as early as possible,” he said.

The official said all decisions are not taken by the central government and local administrations are taking a call wherever necessary, particularly in regard to law and order.

“We have received and made 4,600 calls during last three days,” another official said, adding they have “reached out to 150 houses to help them connect to their kin”.

The replenishment of cash in ATMs has been ensured on regular basis and people are drawing money from ATMs as and when required, said officials, adding salaries of all employees and wages of casual labourers too have been released in advance.

Traders, however, said they were suffering losses due to less business this Eid.

Bashir Ahmed, a livestock dealer, hailing from Poonch, had come to Kashmir with his herd of goats and sheep in the hope of making some profit through sale of sacrificial animals on the eve of Eid-ul-Azha, but he said he might have to take most of them back with him.

“Last year around this time, I had sold off all my herd and was headed home to celebrate Eid with my family. This year I have sold only 15 of the 200-odd goats I had brought along,” Ahmad said.

With curbs on the movement of people, the livestock dealer is also finding it very difficult to find food for his herd. “As the restrictions were eased on Saturday, we were hopeful that sales might pick up on Sunday and Monday,” he said, adding he would make his way towards Poonch on Monday morning with whatever livestock is left with him.

Mohammed Yasin, a readymade garments dealer in Lal Chowk, walked three days in a row from his Hazratbal home to his shop in hopes of selling some of the stocks he had purchased for Eid.

Authorities said elaborate arrangements have been made for the safe and hassle-free returns of Hajis from Saudi Arabia, for which flights will commence on August 18. All deputy commissioners have nominated their nodal officers who will be stationed at the airport from August 18 to facilitate the return of ‘hajis’ to their native places in the city and elsewhere in the Valley.

Special help-line desks will be established at the airport and Hajj houses for the convenience of ‘hajis’.

The government has also stocked sufficient amount of various essential items. Wheat has been stocked to suffice for 65 days, rice for 55 days, mutton for 17 days, poultry for one month, kerosene for 35 days, LPG for one month, and diesel and petrol for 28 days.

All bakery, poultry and mutton shops were kept open on Sunday and long queues were seen outside these shops, another official said, adding traffic is plying smoothly in Srinagar city.

All health institutions at primary, secondary and tertiary level in Kashmir division are functioning fully with sufficient number of doctors and para-medical staff on duty. Identity cards of medical staffers are being treated as movement passes, said officials, adding all medicines are also available in sufficient quantity in all health institutions.

Flights are operating as per the schedule and air tickets too are being treated as movement passes, they added.

Various municipal corporations and other civic bodies in the valley too have taken additional steps to ensure complete cleanliness and sanitation in their respective areas.

To ensure round the clock power supply and its immediate restoration following faults and breakdowns, sufficient staffers have been deployed in various power utilities, officials said, adding adequate transmission cables and transformers are there in the stock to meet any contingency.

Similar arrangements have been made to ensure round the clock water supply with deployment of sufficient staffers at pumping stations and water plants.

The government has also deployed liaison officers in various places in the country, including Aligarh and New Delhi, to help students hailing from Kashmir and pursuing their studies outside the Valley, to celebrate Eid and communicate to their family members in the Valley.

District Magistrate Kishtwar, Angrez Singh Rana, eased the curfew in Kishtwar from 8:00 am but night curfew will remain from 9 pm to 4 am.

Officials said several shops and business establishments remained open in the district and people in large numbers thronged the markets to buy essentials commodities in a peaceful environment ahead of Eid -Festival.